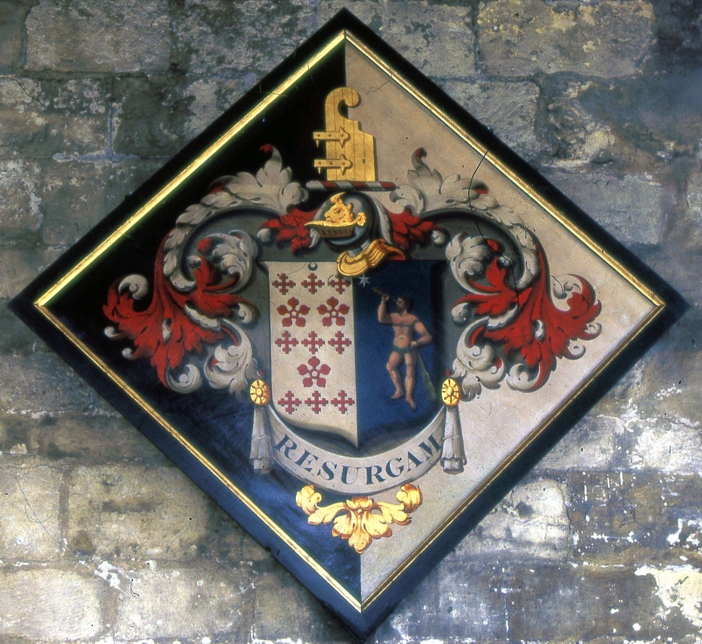 Among the many things of interest to be found on the walls of our parish churches up and down the country are those fairly large lozenge shaped Heraldic Paintings known as hatchments and usually painted on canvas within a wooden frame about 4 feet deep. The hatchment was originally displayed over the front door of the house of a dead person, whose arms it portrayed, and remained there until the deceased person was buried in the local church, whence it was then conveyed and hung on the wall of the nave aisle until a tomb or monument was erected. Fortunately for us, many of these hatchments were not removed after the tomb was made.

The custom of painting hatchments started at the end of the seventeenth century and has continued until our time, although new hatchments are very rare indeed. I had the honour of preparing a hatchment two years ago of the arms of the late Sir Thomas Courtenay Thaydon Warner, M.P., who was Lord Lieutenant of Suffolk, and who died about 13 years previously. This is the only occasion which has come to my notice of a hatchment being prepared and hung in a church after a long lapse. The church is Brettenham in Suffolk. Very few new hatchments have in fact been seen during the last twenty years. In the Sunday Times some months ago there were several letters to the Editor concerning the use of hatchments. Here are extracts from three of them :

” I well remember seeing a hatchment fixed over the front door of the Earl of Powis’ house on the west side of Berkeley Square, in 1891.”

” In 1925 a very old lady died in Eaton Square, London. The hatchment was hung over the front door. I was so impressed that I took a snapshot of it, feeling that I would be unlikely to see such a thing again.”

” On the death of the Rector of Exeter College, Oxford, in 1944, a hatchment was hung over the main gate of the College.”

The subject of hatchments has only briefly been touched on in our heraldic text books, but by far the most interesting recent account comes from ” Intelligible Heraldry,” by Sir Christopher Lynch-Robinson, Bart. and Adrian Lynch-Robinson.

The interest in hatchments lies in the background as well as the Coat of Arms, for the colour of the former will determine whether the deceased was a widower or a widow. The background will vary from all black to black and white halves. The custom developed for impaled arms that when the spouse was still living the background behind their half of the shield would be rendered white, as distinct from the black background of deceased person.

The workmanship of these paintings varies considerably. Some were probably the work of local artists. The eighteenth century versions are interesting but for the most part of poor design. An interesting collection can be seen in Harefield Church (near Uxbridge), Middlesex, where also can be seen the famous tomb to the Countess of Derby with its fine Heraldic ornaments (1636).
Not to be confused with hatchments are the rectangular paintings of the Royal Arms which were for the most part placed in churches at the Restoration, and this was compulsory. The Royal Arms were introduced into church decoration during Henry VIII’s reign when the Pope’s jurisdiction was repudiated by that monarch, who then made himself head of the Church of England. 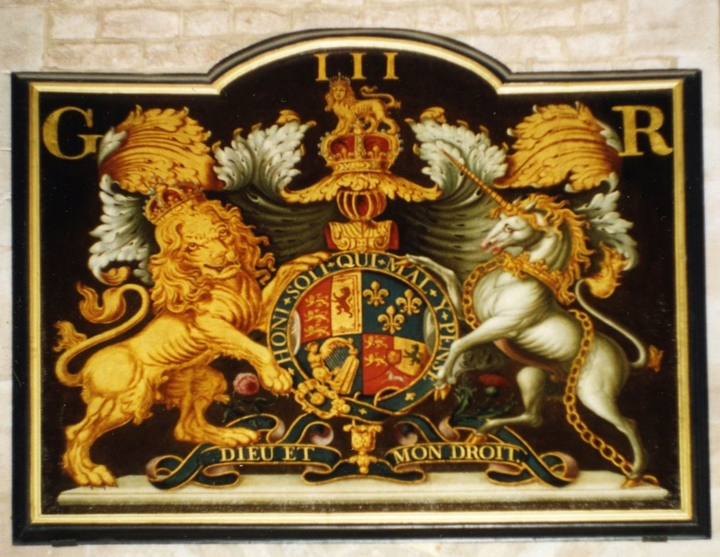 When Henry’s Catholic daughter succeeded him to the throne of England, nearly all these wall paintings were destroyed, but with the death of Mary I and the coronation of Elizabeth, these appeared again, only to be destroyed by Cromwell’s followers. With Charles II’s arrival on the scene, fresh paintings were prepared and many of these remain, and others have been added in subsequent reigns, although the practice was discontinued in the 19th century.

At St. Ethelreda’s Church in Ely Place, Holborn, London, the Royal Arms panel will be found outside the Church on the wall. This ancient building was handed back to the Roman Catholic Church during Queen Victoria’s reign and the signboard of the King’s jurisdiction was therefore removed from the inside of the building.