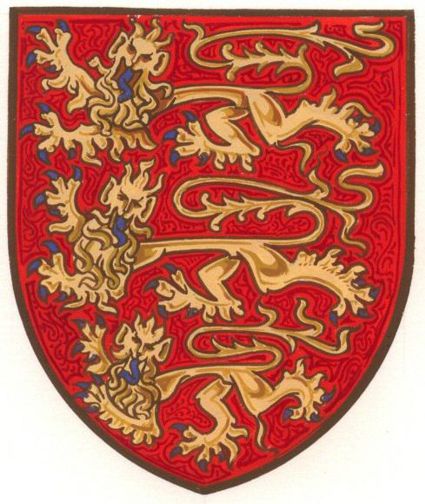 The three lions of England

As I have demonstrated elsewhere (Anglo-Norman Armory, 1976) the lion of Flanders led the field 1 as insignia of royal houses. It is not then, surprising to find the English kings bearing a single lion rampant as well. Whatever the lions of England may be called (Robert Viel, Archivum Heraldicum LXXII (1958, p. 18 et seq.); H. Stanford London, The Coat of Arms, vol. 2, p. 291 and Royal Beasts (1954)), the seal of “Willelmus frater Henrici Regis” attached to a document dated before the winter of 1163 (Facsimiles of Early Charters from Northamptonshire Collections, ed. F. M. Stenton, Northants Record Society Vol. IV, 1930, pp. 24-16) is undoubtedly for William FitzEmpress, brother of Henry II, who probably died 30th January 1163/4. (See also Sir Christopher Hatton’s Book of Seals, ed. L. C. Loyd and D. M. Stenton, Oxford 1950, pp. 299-300).

Although we have no direct evidence that King Henry I bore arms he must therefore have borne a single lion rampant which may well have been crowned. Following the descent of the arms borne by his son-in-law, married to his illegitimate daughter Elizabeth, Fergus Lord of Galloway (Coat of Arms No. 106, pp. 35-41) and the account of the famous enamel of Le Mans (Archive Héraldique Suisse and G. H. White have no doubt that he was armigerous to have given arms in this way. It is interesting to note also that the Anjou coat (which descends to the houses of Salisbury and of Bohun) like that of Galloway has a blue and not a red field. Regrettably, the other children of Henry I, legitimate and illegitimate, provide us with little evidence of the use of armorial bearings. Eleanor who married Alfonso XIII, King of Castile and Leon, has depicted on her tomb in the Huelgas monastery of the Cistercian nuns at Burgos, a thirteenth-century shield depicting three crowned leopards (lions passant guardant) gold on red. Crowned leopards also appear as the English royal arms in the fifteenth-century Burgos armorial (El Libro de la Confradía de Santiago de Burgos, F. M. Pidal de Navascues, 1977) though with two and not three beasts. This number agrees with the two lions passant appearing on the seal of Henry II’s son John, Lord of Ireland and Count of Mortain (C. H. Hunter Blair, Archaeologia Aeliana, 3rd ser. Vol. XVII (1920), p. 265 and 282-86 and the very important article by R. Viel, Archivum Heraldicum (1965), pp. 19-23). Francis Sandford, Genealogical History of the Kings and Queens of England (1677) pp. 81 and 57, illustrates the seals of John, as Lord of Ireland, and his natural son, Richard de Varenne (or de Chilham) respectively. Viel, Archivum Heraldicum (1956) p. 52 illustrates the relationship through John’s sister Matilda, who married Henry the Lion, Duke of Saxony, which leads to their son Henry’s use of two lions passant guardant (H. G. Ströhl, Deutsche Wappenrolle, (1897) p. 72) and the present day arms of the House of Brunswick, Gules, two lions passant guardant Or.

We can dismiss the suggestion that King Richard I’s first seal bore lions combattant. The seal of his uncle William FitzEmpress which repeats the device of the shield on the horse trappings removes that idea of the heraldry manuals once and for all. Both bore a rampant lion, in neither case appearing to be crowned.2  We must turn to the study of chivalric rites to the process of acquisition of armorial insignia along with knighthood to be able to understand the conclusions that can be drawn. A logical application of these helps us to determine what arms King Henry II may have borne.  As my late lamented friend M. Paul Adam-Even recalls in his study of the Reggio Emilia enamel (Archivum Heraldicum 1954), there is great importance to be attached to the well known medieval custom by which a newly dubbed knight might receive the arms of his sponsor, though frequently with adequate differences (Dictionnaire Héraldique, P.C.A. Loizeau de Grandmaison (1851) pp. 399-403).3

In 1179 Hugh IV, Count of St. Pol in Artois, (died 1215) received arms from King Henry II (A. de Cardevacque, Histoire de l’abbaye de Cercamps, 1878) “Quo a rege angliae (King Henry II) arma militaria assumpsi” when dubbed a knight by the King of England though one might take this to mean weapons. Douet d’Arcq (Collection de Sceaux 361) and Demay (Sceaux Artois 70) illustrate two of Hugh’s seals showing the two leopards of England in 1190 and 1201. Demay (op. cit. 73) gives the two leopards of England impaled with the three wheatsheaves of Candavane for Hugh’s daughter in 1234. His sponsor in chivalry being King Henry II in person this must surely mean that Henry had already changed from the use of the single lion to two lions passant guardant. M. Paul Adam-Even (Revue Française d’Héraldique et Sigillographie, 1952) states that the Seneschal of Anjou was bearing two leopards within a bordure of escallops and the marshal raised a banner of his sovereign bearing the two leopards as arms. (R. Viel, “Les Armoires probables d’Henri II d’Angleterre”, Archivum Heraldicum, lxx (1956), pp 19-23).

Although seals only survive from about 1189, it is not improbable that John, knighted by his father in 1185 (Roger de Hovenden, Chronicles, (Rolls Series) Vol. II, p. 303) and invested with the lordship of Ireland, bore the two lions passant (but apparently not guardant — of Norse and Viking family culture in which the grandson was to be looked upon as the reincarnation of the spirit of his grandfather and understand why King Henry II and Richard I chose a single lion, the two lions watchful and symbolic of abundance being adopted to strengthen the idea of descent. It is absolutely impossible with such considerations to pretend that the origins of coat armory have anything to do with descent from Charlemagne as has been propounded recently, (Beryl Platts, Origins of Heraldry, 1980) but with so many individuals called “the lion”, one cannot resist the temptation to suggest that these names derived from their armorial bearings. On the other hand, Henry II had been knighted in 1149 by his maternal uncle, King David of Scotland (Hovenden, Vol. I, p. 211; W. L. Warren, Henry II, p. 36 and R. H. C. Davis King Stephen, p. 107). David’s seal shows a single lion which he had probably adopted simultaneously with his kinsman the Count of Holland. Florent III, Count of Holland, married Ada, sister of William the Lion, and their son Dirk VIII has the lion on his seal in 1198 (Corpus Sigillorum Nederlandicorum 1937-40); “Heraldic Notes on the issue of Postage Stamps”, C. J. Holyoake, Family History Aug. 1976).

Henry “the young king” was under the tutelage of the great William the Marshal. He, his brothers Richard, Geoffrey, and John turned to Europe where with Philip Count of Flanders they continued to practise and gain renown at the tournaments after their King, Henry II, had banned the tournament in England. The young king William, the Lion of Scotland, became Richard’s close companion on the crusades, 10,000 marks having been paid to release him from his obligations to Henry II in 1189. (A. L. Poole, From Domesday Book to Magna Carta, Oxford History of England, 1951, p. 279, quotes the Scottish chronicler Ford’s description of the friendship.) The third crusade had other relatives, close friends of Richard the Lionheart, who also bore lions on their shields. The success of that crusade amid so much defeat came temporarily in 1192 when Richard and his companions concluded an honourable peace with Saladin guaranteeing Christian pilgrims free access to Jerusalem. Did these “lions” bear similar arms because of a pact, a “brotherhood”?4 Can we suggest that the arms of Richard were Azure, a lion rampant Or and that, in the spirit of the age, he commemorated this event by taking three lions on the field of blood and the colour of his “lionheart” (Gules), making them watchful as leopards? — Except that red and gold may already have been the colours, as Henry II, himself knighted by King David of Scotland in 1148, conferred knighthood on Malcolm, King of Scotland, at Tours in 1159 (Hoveden, Chronicle Vol. 1, p. 217).

Yet again, we must recall that while John, having been knighted by his own father, Henry II, would not unnaturally take the same blazon, Richard was knighted in 1173 by the King of France (Hovenden, op. cit. Vol. II, p. 55), who probably bore gold on blue, yet Richard did not assume fleurs-de-lys. The tendency for the continuation of hereditary insignia had already become too well established and the fleur-de-lys would differ too much from the lion accepted as the symbol of his House. By the premise to which we have already referred it is clear that he retook the lion of his grandfather, Geoffrey Plantagenet. The young son of Geoffrey, Count of Anjou, Henry and David, King of Scotland, in support of the former’s claim to the dukedom of Normandy, had concluded an important treaty just before this event in 1148. As second of the name, and reflecting his grandfather’s symbol, he chose two lions passant. During the crusades and while Richard was in captivity from 1191 to 1194 the two lions reigned over England in the person of John, though under much constraint from Richard’s powerful officials. At this time perhaps the two lions were his. When Richard returned he had himself crowned for a second time at Winchester in 1194 (Jean de Pange, Le Roi Très Chrétien, p. 334) thus dismissing the usurpation of John and disengaging himself from his homage to the Emperor to whom he had stood a hostage. At the same time he decided upon a new seal indicating his lineal descent in the third order, differentiating himself from the others of his line, with three lions passant guardant.

However, if Richard had changed his arms as any direct influence of crusading symbolism or relationships, someone among the chroniclers of the Third Crusade would surely have recorded the fact. His brother-in-law, Henry the Lion, Duke of Saxony, was hereditarily enemy of the Staufen house which may account for the perversity of retaining two lions but Richard’s main political aims were always in France (not yet inevitably symbolised by fleurs-de-lys). Henry II could emphasize his succession to his maternal grandfather heraldically, Richard could reassert his status after his release from captivity.5

Although the three lions do not appear until the Great Seal of 1195 (L. Landon, Itinerary of Richard I, Pipe Roll Society, new series, xiii, 1935, App. A), it is also likely that Richard harkened back, albeit with some cynicism, to the allegiance he had given to the Staufen Emperor of the Germans. It is supposed that they bore, for a transitory period, three black passant lions. Henry V, the Lion of Saxony, was married to Matilda (or Maud) sister of Richard I. This Henry was the grandson of the Emperor Lothar. Only a few years earlier Canute VI of Denmark, about 1190, reflected his refusal as a boy, twenty years before, to renew his homage to the German Emperor and chose the Danish lions for the first time and perhaps for a similar reason of defiance.