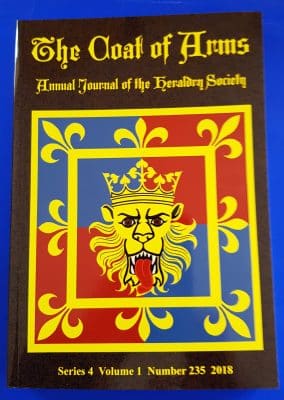 £5
By The Heraldry Society.

Our scholarly journal is produced once a year in September and is sent to all members.

267 pages of articles, with many coloured illustrations – you can’t really discuss heraldry without coloured images.

There is something for everyone in this volume, the beginner and more experienced.

Fox, Paul A.    Brotherhood in arms

Slater, Stephen  A Wiltshire passion for cognizances, the Hungerford family and its allies

Sutherland, Duncan  Pineapples, pelicans and Pursuivants: heraldry in Jamaica 1660 to 2010