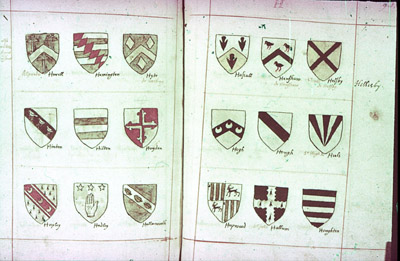 The Vale Royall of England

Or: Countie Pallatine of Chester containing A Geographicall Description of the said Countrey or Shyre, with other Things thereunto apartayning. This is the second version of Smith's work, containing some additional material. Smith became Rouge Dragon in 1597, and proudly added his heraldic signature to the title. This manuscript is the actual copy used by the printer for the edition published by Daniel King in 1656, with other early descriptions of Cheshire, and the compositor's marks for page divisions survive in the margins together with soiling by inky fingers. Former owners of the manuscript include Sir Robert Bruce Cotton (1571-1631), the great collector, and. his son Thomas; Sylvanus Morgan (1620-93), the arms painter and collector of heraldic manuscripts, who sold it to Elias Ashmole (1617-92) whose arms are stamped on the clasps. The title also bears the signature of Roger Norton probably one of the prominent 17th century London printers of this name.