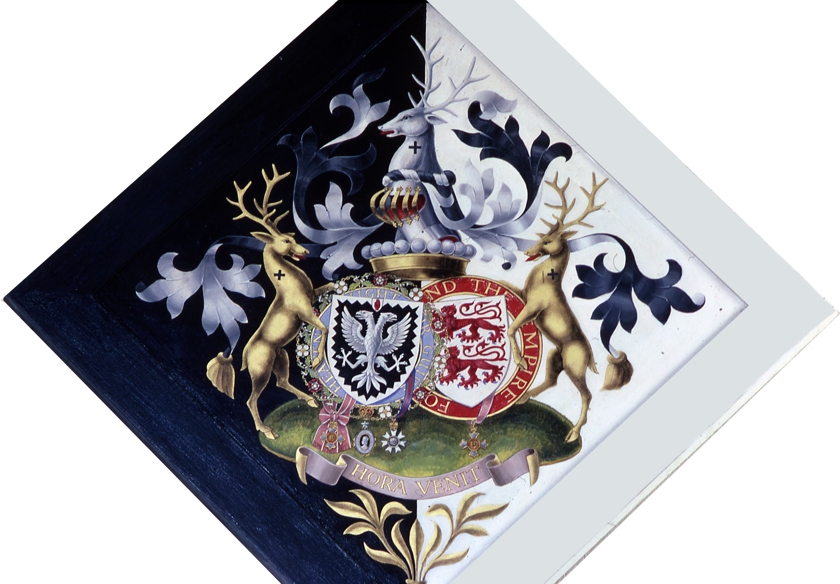 John Titterton’s interesting article in the Coat of Arms no 154, Summer 1991 (The hatchments of Marnhull church, Dorset) illustrates the patient research which he and Peter Summers have put into the study of hatchments and the awakening of interest in these monuments which has taken place in recent years.

It is usually stated, in effect, that hatchments were carried in the funeral procession, then hung on the outside of the house during the period of mourning and later transferred to the local church. As we begin to study them more closely this explanation becomes less satisfying and fails to account for some practical problems.

Recently (cf. The March Heraldry Gazette 1991) I have had the opportunity to paint a hatchment and to carry it in a funeral procession. Even with fairly fast drying modern paints and with the longer time needed for the application of gold leaf, it would be difficult to have a hatchment ready in under a week and preferably longer. Whilst great state funerals might be delayed, it does not seem so likely that minor local gentry would remain unburied for long after their deaths. If the hatchment were to have been painted prior to the death of its owner, the artist would have to gamble on whether or not the husband would predecease his wife (or wives) in order to colour the background correctly — technically it would not be satisfactory to paint it in after finishing the Arms. This might suggest that the hatchment was not required until some time after the funeral.
In the case of a widow, of course, the problem does not arise and I am at present working on a hatchment for such a lady still happily living. In connection with this, it might be of general interest to refer to a reply from Lord Lyon to my enquiry as to whether, in view of the complex nature of the Arms, he would allow them to be displayed on an oval rather than a lozenge. He says, ‘I am increasingly finding the lozenge unsatisfactory from this point of view for the display of ladies’ Arms and, increasingly, I am specifying that for ladies the Shield should be of oval form.’ Garter has offered no opinion on the subject. As hatchments grew larger and larger (I have restored one in Lichfield Cathedral measuring nearly six feet from corner to corner!) one can understand why they came to be painted on canvas since, unless the Arms were actually attached to the funeral carriage, the weight of even a small all-wood panel is considerable when carried atop a pole,as I can avouch!

Somewhere there must be funeral records which will cast light on the use which our ancestors made of these interesting examples of heraldic art and could we also hope for their revival to add colour to some of our flowerless modern funerals.

PF editor’s note: it is possible that the answer to this conundrum is that the hatchments formerly carried at heraldic funerals were of different design and function to those which now hang in churches, although the one tradition presumably gave rise to the other. Depictions of seventeenth century heraldic funerals show that the heralds would process in front of the bier carrying the knightly accoutrements: spurs, sword, banner, helm and shield. This follows a tradition stretching back into the Middle Ages, when the arms were often left above the tomb. The shield in the procession, from the reign of Henry VIII, was called a hatchment, a corruption of the word achievement. In an era when gentlemen no longer had in their possession actual shields of arms the hatchment came to be painted on canvas, making it light and portable. It is quite evident from herald painter’s funeral books from the seventeenth century that coffin shields and hatchments were indeed painted between the time of death and the funeral. Multiple shields were typically placed around the draped coffin.

The earliest surviving church hatchments date from the second quarter of the seventeenth century when heraldic funerals were still very much in vogue. It is possible that these items were carried in the funeral, and deposited in the church; but they might equally represent a new innovation, the buildings hatchment which was hung over the doorway of the house throughout the period of mourning.