HRH The Duchess of Cornwall 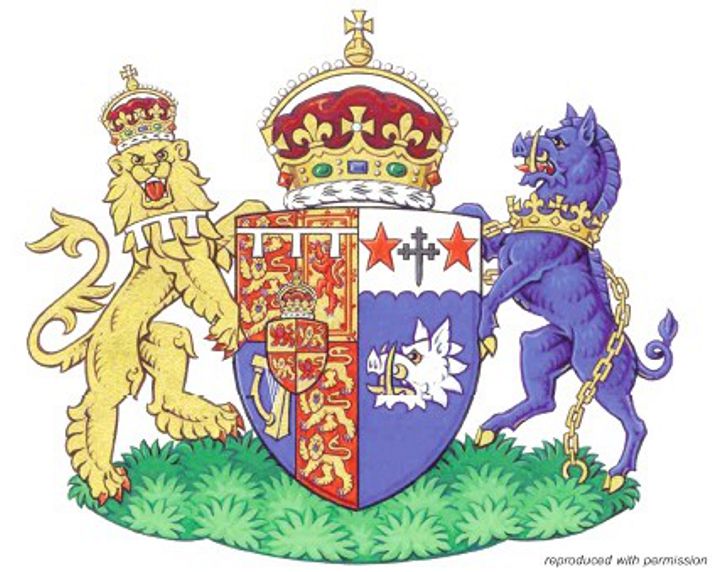 The Duchess of Cornwall has been granted armorial bearings which reflect her position as consort to The Prince of Wales. The arms follow ample precedent in marshalling elements from the achievement of The Prince of Wales to the dexter and those relating to his wife’s family to the sinister. The shield is ensigned by the single arched coronet and supported by the dexter supporter of the Heir Apparent.
The arms to the sinister are derived from the arms recorded for Major Bruce Shand, the Duchess’s father, except that a minor difference appears to have been made in the shield’s principal charge, the boar’s head depicted as erased rather than couped. Major Shand’s crest is ‘a boar statant Azure armed and langued Gules his dexter forefoot resting on a mullet Gules’ and the blue boar gorged with a royal coronet and chained appears as the sinister supporter.

The Shands of Craig, Aberdeenshire became opulent in the 16th and 17th centuries. There is a tradition that the Shands came to Aberdeenshire in the 14th century and it is possible that the boar’s head indicates some feudal or similar connection with the Gordons whose ancient arms featured a single boar’s head (current arms feature three). The three mullets gules featured on the chief of the Shand of Craig arms probably came from marriage alliances with families which featured them. The difference adopted by the Lord Lyon in Major Shand’s arms is the replacement of the centre mullet by a cross crosslet fitchy