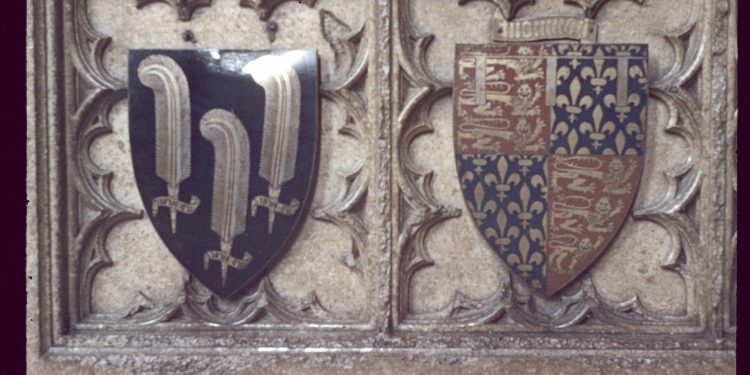 Until quite recently the Black Prince’s “shield for peace” was regarded as an heraldic whim of that most chivalrous prince. In his Heraldic Imagination, Rodney Dennys on the contrary conjectured that such shields were presumably not uncommon in the tilt-yard.1 In the course of my research, I discovered coincidentally a number of testimonies bearing on the use of shields for peace in the Spanish Netherlands, that univocally confirm the latter hypothesis. They offer furthermore an opportunity to advance a possible typology of shields for peace, as well as a likely bridge function between different means of heraldic expression.

Between 1482 and 1794 only one out of twelve rulers of the Southern Netherlands died on its soil, the others expiring either in Spain or in Austria. Memorial services were held in the chief cities of the country, that lacked nothing in realism and sumptuousness but the body of the deceased.2 As the actual direction of such memorial services was one of the responsibilities of the principal king of arms, it comes as no surprise that their embellishments were predominantly of an heraldic nature. The content of the heraldic display varied throughout the period, keeping pace with political needs and the situation of the treasury. Tournament equipment was displayed as well as the equipment of war. The latter (consisting of the helmet and crest, the shield, tabard, pinsel, guidon, standard and banner) was as a rule adorned with the official arms of the monarchy; whereas the first (containing a tilting helm with elaborate panache, a tilting shield [called targe] and a pinsel, guidon and standard “of the colours”) were used to show liveries, badges and devices of a strictly personal nature. Their description and analysis will clearly prove this.

The shield for peace of the Emperor Charles V (1500-1558) is the oldest of the series. It was carried in his funeral procession and displayed in the ensuing services in Brussels on December 29th and 30th, 1558. Subsequently it was put in his cabinet d’armes,3 where it hung at least till the 1720s when André François Jaerens made a drawing of it.4 The blazon reads: Sable, a pale Or, over all issuant from waves of the sea in base Proper, two columns, imperially crowned of the last, conjoined by a scroll Argent, inscribed with: ‘plus ultra,’ Sable.

The example set for Charles V was followed at the memorial service for his son Philip II (1527-1598).

Because the archduke died childless, the Southern Netherlands reverted to the Spanish crown in the person of Philip IV (1605-1665). During his reign in disaster only second to that of his son Charles II (1661-1700), two memorial services were held wherein a shield for peace figured. The first was dedicated to the memory of the Emperor Ferdinand II (1578-1637), the king’s uncle. Unfortunately, the description of the ceremony, edited by Adrian Colbrant, principal king of arms, only mentions the presence of a tournament helmet and shield without further particulars.5

In the memorial service for Don Balthasar (1629-1646), eldest son of Philip IV, a blank shield for peace was displayed aside of the duly differenced paternal coat. Luckily Colbrant provides a contemporary explanation:the prince had not yet reached the age to have his own device. In other words, though he was of tournament rank, he had not taken part in any tournament.6

On November 4th and 5th, 1665 it was the king’s turn to be commemorated. Once more a tilting helmet, adorned with white, red and yellow feathers, was set aside a shield for peace. This time the blazon ran: per pale Or and Argent, on a pale Gules, between dexter a sun and sinister a moon in her decrement proper, a globe of the third, charged with a fess of the second and regally crowned of the fourth, in chief and in base a scroll Argent, the first inscribed with: cum sole; the other with: et astris; all Sable. Though rendered somewhat unusually, here both form (livery colours, device and motto) and message (Spain’s predominance) are repetitions of earlier examples. The curious thing about it is that the emblem was also used on medals struck during the king’s reign.7

The shield for peace painted for John III (Sobieski), King of Poland (1624-1696)), is the last that figures in the sources. Though he was in no way related to the Hapsburg family, he fully merited their respect for the relief of Vienna in 1683. On the other hand he was father-in-law of Maximilian II Emmanuel, Elector of Bavaria (1676-1730), at that moment governor-general of the Spanish Netherlands. The device was clearly made for the occasion, for it contained or and azure as livery colours of Sobieski, clearly an error of ignorance.8 Its description was: Per pale Gules and Azure, a pal  Or, over all an eagle soaring Argent, crowned, beaked and membered of the third, grasping an escutcheon Azure (sic), a buckler Or (sic) (for Sobieski), a sunburst issuing from the dexter corner proper, and a mount in base Vert, the whole accompanied by the motto: ‘sic muniat tutior’, in letters Sable on a scroll Argent.9

There is a striking similarity in the composition of the enumerated shields. They all consist of three components: a field of several tinctures, a device and a motto. The field invariably bears the livery colours, consisting of at least two and at most three tinctures. The origin of their number may well lie in local practice that regarded liveries of more than one colour to be a privilege of nobility. Thus a nobleman of the Spanish Netherlands could dress his servants with a livery of more than one colour, while a bourgeois who did not give his servants a single coloured habit, was punishable for usurpation.10

The devices likewise have their particularities. Although the shields only have five charges on average, they look crowded. They stand on the outer edge of what is accepted as heraldic, which also explains why they require such lengthy blazoning.

The sources clearly indicate that not just any member of royalty could sport a shield for peace. Through the enumeration it has already become clear that only the male half of the dynasty was regarded fit. But the Memorial Service for the Cardinal-Infant Ferdinand (1609-1641), a brother of Philip IV, proves the distinction was a bit more subtle. For him no shield for peace was displayed 11 : as a priest he was forbidden to participate in a tournament. Hence only one conclusion can be drawn: in the Spanish Netherlands shields for peace were armorial bearings of a specific form reserved for use of those of tournament rank.

Regressing to the shield for peace used by the Black Prince the great similarities immediately jump to attention. The blazon runs: Sable, three ostrich feathers quilled argent and passing through scrolls of the same, bearing the words: ‘ich dien’.12 The presence of scrolls bearing a motto is, in my opinion, the clearest possible argument for expanding the typology from shields for peace in the Spanish Netherlands to shields for peace in general. Once this proposition is accepted, one cannot but agree with Fox-Davies’ statement that black was the prince’s livery.13