The earliest known depiction of the Royal Arms of England? 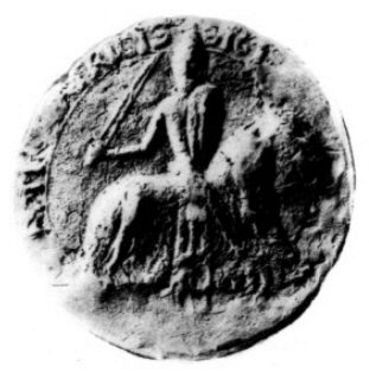 The seal of William fitz Empress

Sometime during his tenure of office, Robert Glover, Somerset Herald. 1570-1588, made a rough sketch of seal depending from a charter of William, Count of Poitou, son of Geoffrey Plantagenet and youngest brother of King Henry II. It has been said that ‘the lion rampant shown on the shield and the housings of the horse give us what is probably the earliest known occurrence of the Royal Arms of England’.1 Not only that, but the housings with their scalloped edge and decorations represent ‘a very early, if not the earliest instance of heraldic horse-trappings on a seal’.2 Although it has not been possible to examine Glover’s drawing at first hand, it is tantamount to certain that what he depicted was an instrument which William used on a number of occasions, and a photograph of an impression from another source has been obtained.3

It hangs from a charter to Solomon, the Count’s despenser, granting him all of William’s land in Luffenham, Rutland, to hold of the grantor and his heirs for the yearly render of a ‘mewed’, a fully trained fish-hawk. The charter cannot be dated with precision but, to judge from various indicators, including the names of the witnesses, it was probably issued towards the end of a period finishing in 1163. As to the seal, when prefect it was about 2¾”, (7 centimetres) in diameter. It shows William pacing to the right, he wears a typically Norman conical helm with a nasal, a sword aloft in his right hand, and carries his shield, heraldic sinister to view, on his left arm. As touched on above, the shield has the image of a lion rampant contourné 4 and the animal, in the same attitude, appears twice on the horse-trappings, once covering the area of the withers, once, the haunches. The legend around the circumference of the seal survives as SIG … M … ATRICIS which in its entirety probably read Sigillum Willelmi filii Imperatricis – that is ‘the seal of William, son of the Empress.’ The charter is endorsed: Luffenham originale.

For all that William was a close member of the royal family we know little about him. He was the third son of Geoffrey Martel, Count of Anjou and the Empress Matilda, widow of the German Emperor, and daughter of King Henry I of England. His eldest brother became Henry II, and his other sibling, Geoffrey, was count of Nantes. William was born in August 1136.

In many ways he was unlucky. When only nineteen, and the year after his brother had succeeded to the throne, a plan to conquer Ireland as an appanage for him 5 came to nought, and the proposed expedition did not take place. A further scheme by the king to aggrandise his family by marrying William to the rich heiress, Isabel de Warenne, daughter of the earl of Surrey and widow of King Stephen’s son, the earl of Boulogne and Mortain, was frustrated by Thomas Becket 6 on the grounds of consanguinity.

Luffenham in Rutland, to which the charter refers, was part of the great royal manor of Barrowden and had been in the ruler’s hands since, at least, the time of Domesday in 1086. There is no known evidence as to when William received this or any other of his lands or, indeed, how large it was, but by indirect evidence Luffenham came to him between 1156 and 1158. It would seem that William maintained a substantial household – the charter is attested by a marshal, Drogo, and an ‘ostiarius’ or usher, Anschetill. The despenser, Solomon, was, of course, another member of his entourage.

That is about all except, possibly, for the interesting footnote that William was known as ‘Longsword’ long before his bastard nephew, the earl of Salisbury, who died in 1226 was so called. Indeed. William used the epithet in his own formal style, the enrolment of one of his charters beginning Willelmus Longespe [frater Henrici regis Anglorum].7  William died on 30 January 1164 at Rouen at the age of twenty-eight.