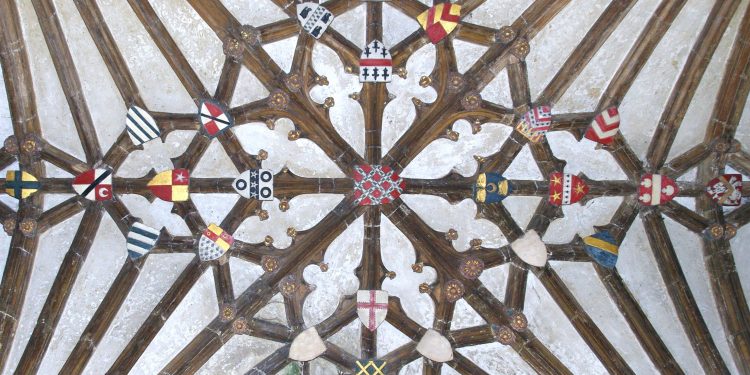 The Great Cloister of Canterbury Cathedral

The cloister is effectively a  roll of arms designed during the reign of Henry IV and into the very beginning of the reign of his son Henry V by Archbishop Thomas Arundel. Construction occurred in the period 1408-1414.  The above picture shows some of the lost shields, while others have been incorrectly painted. A painstaking process of reconstruction, largely based on a new analysis of contradictory antiquarian sources, has made it possible to restore many of the losts shields and to determine with high confidence the correct original colours. These findings are to be presented in a new book, but in the meantime it is possible to walk around the cloister with a reconstruction of how it probably looked at the end of the medieval period, with each shield labelled for its owner.

The cloister as  originally conceived  contained 856 heraldic shields, badges and devices of which 576 were unique. Some 365 families, principalities, religious foundations and other individuals both real and imagined were represented, some with more than one shield or device. More precisely broken down there were 252 families, 51 peerage families, 3 English royal families ( Lancaster, York and Beaufort), 20 principalities, 12 religious foundations, 9 bishops, 7 saints, 3 heroes, 4 cities or towns, 2 priests, 1 monk and 1 for God himself ( in the form of the Holy Trinity).