The inauguration of Lyon King of Arms

The installation of Dr Joe Morrow as Lord Lyon

During the later Middle Ages the chief herald or King of Arms was quite an important personage and he was generally employed only by a prince.1 Because of his duties which included acting as a messenger of war and peace and often as an ambassador on important diplomatic missions his person, like that of all heralds, was considered sacred and inviolable. Any slight directed toward him was a direct insult to his master and indirectly to all of chivalry. Thus, in Scotland in 1515, when Lord Drummond struck the Lyon King of Arms he was tried as a capital offender and was saved only by the personal intercession of the Lyon and some of the more powerful nobility. Even then he was forced to kneel, acknowledge his crime, and submit himself to the Lyon.2 Despite the later importance of this office however, very little is known of its early history. One thing is clear though and that is that there was a very close relationship between the ruler and his King of Arms. One was a direct representative of the other and in the exercise of his office the chief herald assumed the authority and even the persona of his prince. This is clear from his conduct of office and particularly from the manner of his creation. A short discussion of this creation with special attention to one of its aspects may help to illuminate a knotty problem in the early development of heraldic office and may indeed have wider significance as well.

In the fourteenth century the Kings of Arms were usually created by the monarch or on occasion by his deputy3 (in England this deputy was generally the Earl Marshal). The ceremony was in the form of a coronation in which the monarch placed a crown on the applicant and poured wine on his head. From later English and Scottish sources it appears that he was also invested with a tabard bearing the royal arms, and with a special collar, a rod or sceptre of office, and a gold chain. In Scotland, according to Sir Walter Scott, the inauguration of the Lord Lyon was a mimicry of the royal coronation — the only difference being that wine was poured on the candidate’s head instead of oil.4 The creation of Sir David Lindsay demonstrates the importance which was attached to the office for he was crowned by James VI with the ancient crown of Scotland (used before the Scottish kings assumed a closed one) and was privileged on the occasion to wear it at the king’s table. Certainly this was a singular honor especially when one considers the nature of James VI’s view of kingship and the symbolic importance of a royal crown. It can only be understood if we view the Lord Lyon as an extension of the king himself.

It may be that Lindsay’s predecessors enjoyed a similar honor and a similar unction. This is made more likely because of a mention of the wine custom in a treatise written in the late fourteenth or early fifteenth century by the Anjou King of Arms. Apparently only one copy of this work survives in one of the Rawlinson manuscripts in the Bodleian Library. It’s contents however have been described by Sir Anthony Wagner. According to that careful author the Anjou King is upset because it has recently become the custom for a lord to ‘baptize’ his herald with ‘a little wine of his lordship from a cup of silver gilt’.5 Two things seem important in this description. The word ‘baptize’ is clearly a misnomer if it is meant to apply to a King of Arms for one does not baptize a King, one anoints him. The similarities already noted between the creation of the two ‘sovereigns’ bears this out. Moreover, the area over which a King of Arms has jurisdiction was often called a kingdom and this usage would seem to be proper only if the constituent act were thought of as anointing. Secondly, it is important to note that this usage strikes the Anjou King as an unpleasant recent innovation. From this criticism then, the question naturally arises as to the source of the innovation. One could point to England but there is no clear evidence there on which to base a claim of priority. With Scotland however the case seems different for if we look at traditional Celtic inauguration practice there does appear to be some precedent.

A considerable amount of debate still centers around the problem of which people in Europe first thought of pouring a sacred liquid on the head of kings.6 It may be that the Celts were the first Europeans to practice this rite for it is mentioned by Gildas Sapiens whose floruit is usually assigned to the sixth century.7 There are other possible references also and Mr Eric John (among others) has recently argued in favor of their acceptance.8 Whether one accepts these references or not it seems that the Celts did not long continue the practice. Part of the reason may be because they were already using wine or ‘red ale’ in their royal inauguration ceremonies. While these rites were essentially pagan there may have been a Christian rationale at bottom. After all, in Christian ritual wine is the sacred liquid par excellence. 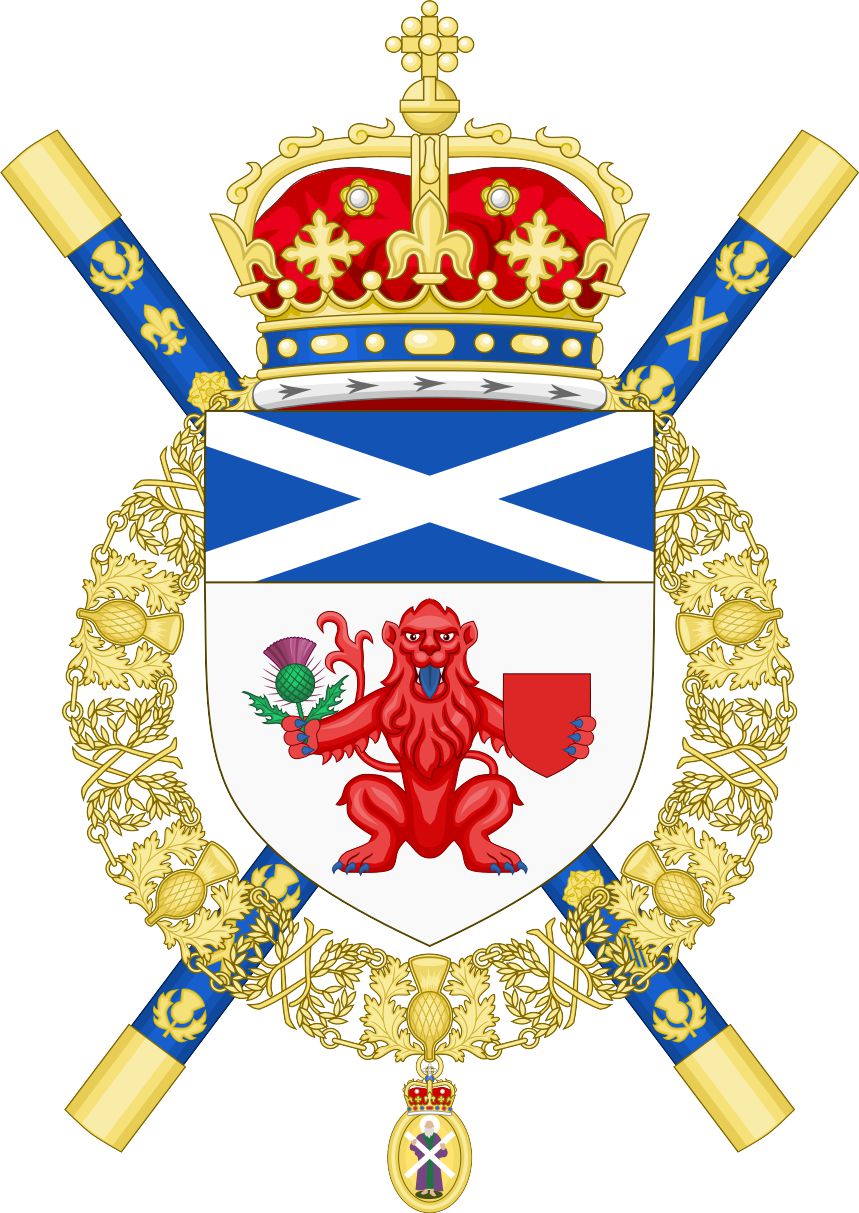 Arms of the Lord Lyon

Both the Old Irish texts Baile Chuind (675-700) and Baile in Scail (now dated late ninth century) make extensive use of wine symbolism and figure it as the liquid of ‘Sovranty’ which is presented to each king by his metaphoric wife — the goddess of the territory.9 Thus in the latter text King Conn of the Hundred Battles is described as entering a miraculous dwelling. ‘They went into the house and saw a girl seated in a chair of crystal, wearing a gold crown. In front of her was a silver vat with corners of gold. A vessel of gold stood beside her, and before her was a golden cup … The girl was the Sovranty of Ireland …’10 When she asked to whom the ‘red ale’ dergflaith should be given, the answer was to ‘every prince from the time of Conn onwards’. Indeed this ritual marriage and sacred liquid were so well known to people of the time that writers could make puns on the word flaith ‘sovranty’ and laith ‘a drink’.11 This surely must be one important gauge when one attempts to assess the dissemination of ideas. If one can play on words and still expect to be understood then there must be a wide area of understanding on several levels.

There is moreover some evidence to show that wine was poured on the king as well as, or alternatively to, being drunk by him. In the Felire Oengus (circa 800) a good man is compared to an altar on which wine is shed.12 The allusion is clearer in the Tain Bo Cuagline (written down in the mid-twelfth century). There a famous warrior is offered the greatest inducements to fight the hero Cu Chulainn. Among them are ‘Findabar as a wife, and to sleep (fes) always in Cruachain and that wine shall be poured on him.’13 Findabar is the daughter of the territorial goddess whom kings must ritually wed (she is the original of Guinivere).14 Cruachain is both a royal seat and the home of the goddess, and the wine of course is that of sovereignty. A symbolic dream of a certain queen named Aimend carries the same burden. She imagined her five sons as wolf-cubs and herself as bathing them in different liquids. Only the first two of them became kings however and those were the ones she bathed in wine and ale.15

In Ireland then the concept of the monarch’s marriage to the goddess of the land was closely bound up with the ceremonial use of wine. A good deal of this tradition was known in Lowland Scotland also (as I have attempted to show elsewhere).16 Thus, when James VI and I spoke to his first parliament in 1604, he personified his two kingdoms as a bride and the king of the island as their spouse:

‘What God hath conjoined then, let no man separate. I am the husband and all the whole Isle is my lawfull Wife … I hope therefore no man will be so unreasonable as to think that I that am a Christian King under the Gospel, should be a Polygamist and husband to two wives …’17

Indeed this idea can be found in Lowland poetry and ballad lore from the thirteenth to the nineteenth century.

Yet the use of wine as a royal unction is not mentioned in early Scottish sources. More than likely this is because of the paucity of early materials and the pronounced Norman influence on Lowland kingship. It does seem probable however that we have an echo of this tradition in the creation of the Lord Lyon. Students of heraldry have generally agreed that this office is derived in part from that of the Celtic court bard whose duty it was to keep the ruler’s pedigree and other genealogical information.18 We know also that one of these bards took part in the coronation of Alexander III at Scone in 1249, where he recited from memory twenty one generations of the king’s ancestors.19 It would of course have been the duty as well as the delight of this ‘High Sennachie’ to remember customary ritual, and when the transition was made to Lord Lyon this knowledge may have played a crucial role.

With regard to the precise dates of the change of office about all that can be said for certain is that sometime between 1249 and 1327 (when there is mention of the solemn crowning of the Lyon King with the aid of the Bishop of St. Andrews) the development was completed.20 If one accepts though, that the existence of a herald implies the existence of a king of heralds then the gap may be narrowed, for at Alnwick in 1333, Froissart reports the appearance of uns hiraus d’Escoce qui s’apelloit Dondee.21

Because of the lack of source material, our exercise here, like so much else in the early history of heraldic office, is to a certain extent a problematic construction. Nevertheless, this explanation does fit the facts at our disposal. It is clear that unction with wine is spoken of in Celtic sources and it is most likely that the Lord Lyon’s office had a Celtic background. Then, since we know that the wine custom was regarded as an innovation by an important French King of Arms, we are led back to the British Isles and to the kinds of connections made here.