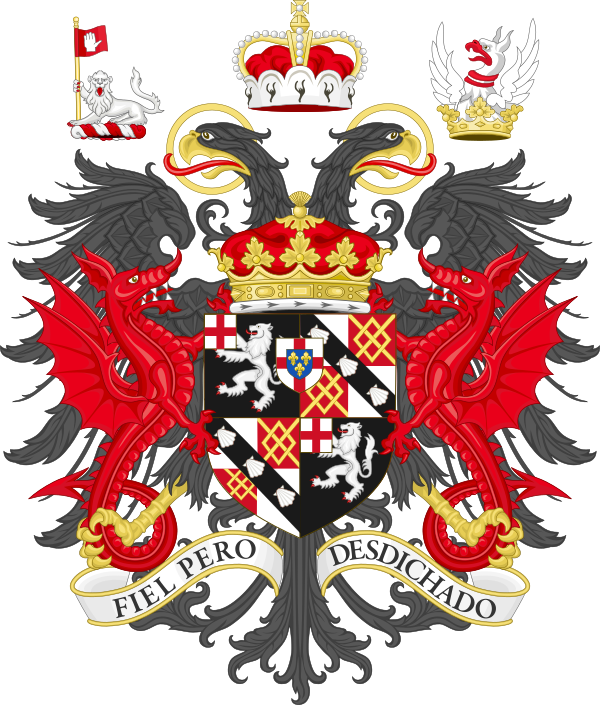 Arms of the Dukes of Marlborough

The arms of the Spencer-Churchill Dukes of Marlborough (Churchill quartering Spencer) display two augmentations; one upon the Churchill quarters, and another over all. The first was granted to Winston Churchill (as he then was), the father of John, first Duke of Marlborough, in respect of his loyalty to the Royal cause during the Great Rebellion. A Warrant, addressed to Sir Edward Walker, Garter, is dated from Whitehall, 11th December, 1661, and orders ‘an Augmentation to the arms of WinstonChurchill of Miniterne (sic) co. Dorset, for service to the late King as Captain of Horse, and for his present loyalty as a member of the House of Commons.’2 The warrant was followed by a grant dated 20th January, 1662 3 which specified that the augmentation should be a Canton Argent charged with a cross Gules. The original arms of this family were Sable a lion rampant Argent debruised by a bend Gules. The patent authorised Winston and his descendants to ‘leave out the bend’, and also granted a crest.4
Some argument concerning both the augmentation and the revised arms seems to have taken place some twenty-five years later, for in a letter to John Gibbon, Bluemantle, dated 22nd June, 1686,5 Sir Winston 6opines that his son, (which one is not clear), is at liberty to omit the canton if he sees fit. This would, of course, result in Churchill being displayed as Sable a lion rampant Argent, which arms had been borne by other families, and to this Bluemantle objected. Unfortunately, only this one letter appears to have survived, and the nature of the reason for the correspondence is unclear.
The second augmentation is often and misleadingly said to have been granted to John, first Duke of Marlborough for the victory at Blenheim in 1704.7 This is not so. The origin of the device appearing in the arms of the later Dukes of Marlborough lies in an Act of Parliament, 3 and 4 Anne (1704) Cap. 6 which enabled the Queen to grant to the first Duke, the Honor and Manor of Woodstock and the Hundred of Wootton.8 The Act recites Marlborough’s deeds and victories, and authorises a grant by Letters Patent under the Great Seal, the lands to be held ‘of her Majesty her heirs and successors as of her castle of Windsor in free and common sockage by fealty and rendering to her Majesty her heirs and successors on the second day of August in every year forever at the castle of Windsor one standard or colours with three Flower de Luces painted thereupon for all manner of rents services exactions and demands whatsoever.’9
It will be noticed that the blazon of this flag is incomplete, and the precise details of the flags which were, presumably, presented during the lifetime of the first Duke are not known. John, Duke of Marlborough died on 16th June, 1722,10 and arrangements were made for a funeral to take place on 9th August which would include a magnificent procession from Marlborough House to Westminster Abbey. Funerals of the greater nobility were at this time still being marshalled by the Officers of Arms, and it was desired that among the banners and standards to be displayed, should be one for the Honor and Manor of Woodstock.

The flag mentioned in the Act of 1704 was thought to be suitable to represent the Manor, but, as the blazon was incomplete, Garter Anstis (Senior) applied for a Royal Warrant which should more clearly specify the design. The Warrant was issued on 19th July 1722, 8 Geo. 1. in the following terms:-

…’We being desirous that the Funeral of the said Duke shall be solemnized with all the circumstances of honour his high merits have deserved, do hereby signify our will and pleasure and direct and command you that in the said Funeral you shall set forth the said Standard or Colour of the three Fleurs de lis in the following method, that is to say Azure three Fleurs de lis Or in a shield placed by way of escutcheon on the Cross of St. George according to the draught hereby annexed, to be borne either on a Shield, Standard or Banner as belonging to the Honor and Manor of Woodstock.’11In the Funeral Procession the standard of the Manor of Woodstock was borne upon a lance.12

Curiously the Warrant goes on to say that in place of the images of saints, a ‘banner of the Garter’ shall be borne ‘which is to be the Cross of the Order impaling the Arms of the said Duke with an escutcheon thereon of the Arms of the Duchess all surrounded with a Garter and surmounted (sic?) with a Ducal Coronet.’ An odd instance of marital arms being displayed within the Garter by virtue of a Royal Warrant!
Thus the origin of the device of an escutcheon of France surmounting the arms attributed to St. George. The next development took place almost one hundred years later, in 1817.
John Churchill, first Duke of Marlborough left no male heirs, his only surviving son having died without issue in February 1703.13 In 1706 the Duke sought and obtained an Act of Parliament which attached a Special Remainder to his titles, by which they might descend to his daughters and to their male heirs.14 The eldest daughter, Henrietta, Countess of Godolphin, succeeded her father as Duchess of Marlborough in her own right. She, like her father, died without an heir male, and in 1733 the Dukedom passed to Charles Spencer the eldest surviving son of Charles, Earl of Sunderland, by his wife Anne, the second daughter of the first Duke of Marlborough. It is in this line that the present dukes descend.15 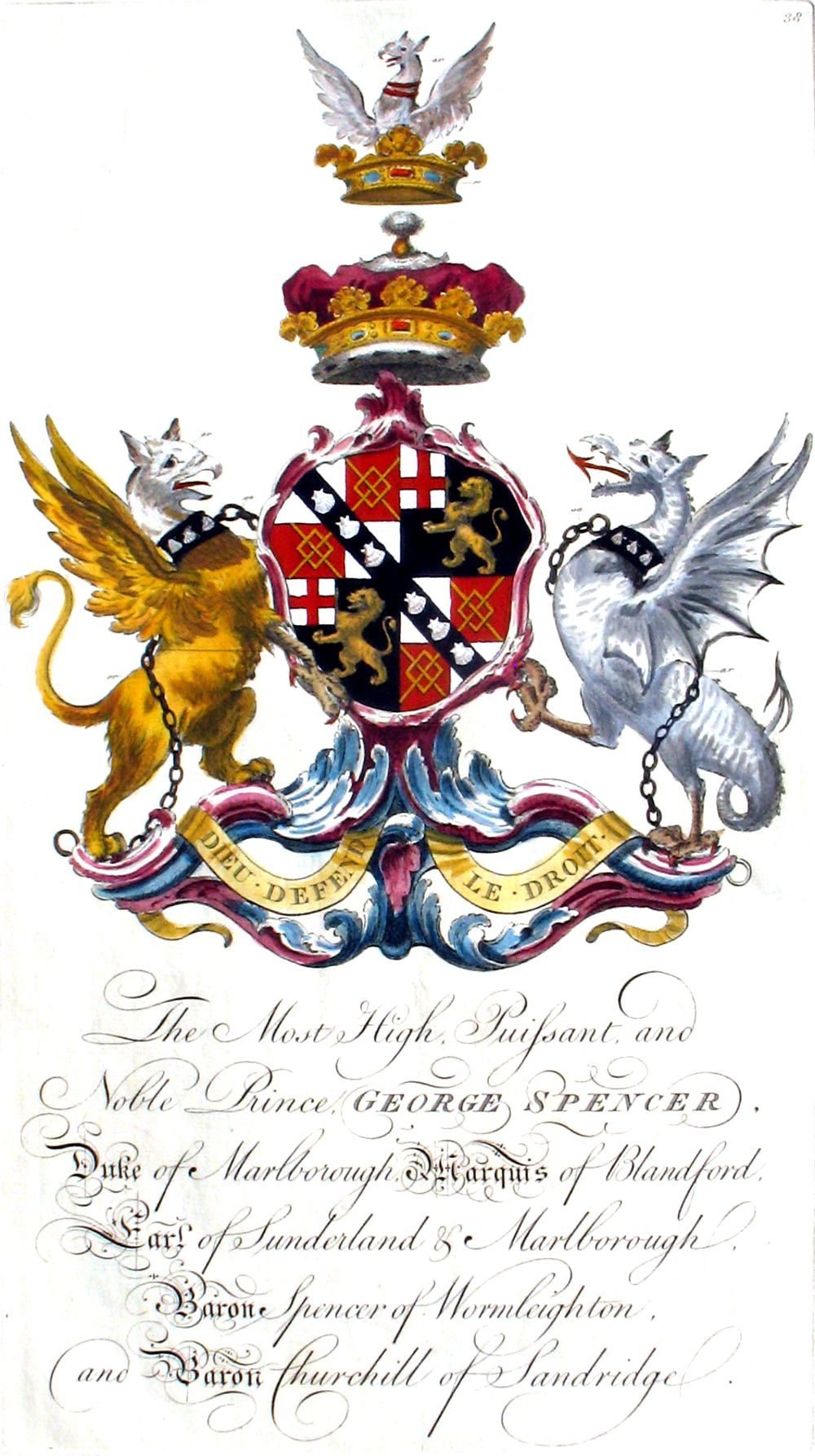 Bookplate used by the 5th Duke of Marlborough prior to 1817

The fifth Duke, George Spencer, petitioned for a Royal Licence which was issued on 26th May, 1817, and which authorised him to use the name of Churchill in addition to and after that of Spencer, and to bear the arms of Churchill and Spencer quarterly ‘together with a Representation of the Bearings on the Standard or Colours belonging to the Honour and Manor of Woodstock in an Ineschocheon over all in the Centre Chief Point.’ It also allowed him to use the supporters of John, Duke of Marlborough in lieu of those he had borne hitherto.16 The achievement was duly exemplified by Letters Patent dated 27th August, 1817.17 All of these charges and additions were to be made, said the Letters Patent, ‘in consideration of his descent from that illustrious hero John Churchill, Duke of Marlborough.’
Thus, although the device of the three fleurs de lis surmounting the Cross of St. George has an association with the Battle of Blenheim, in so far as that victory prompted the grant to the Churchills of the Manor of Woodstock, it was certainly not granted as an augmentation to the first Duke, who can of course, never have seen it. 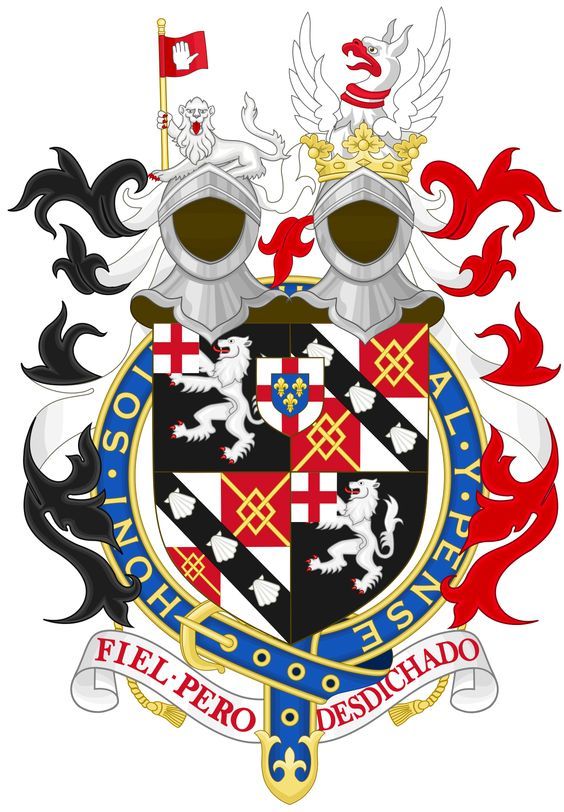