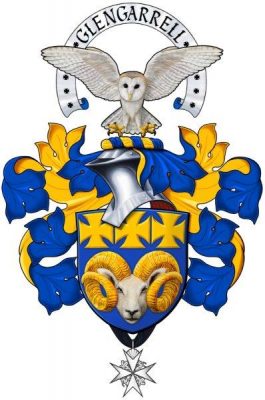 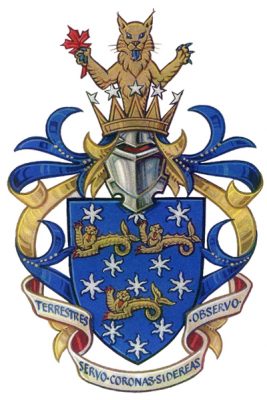 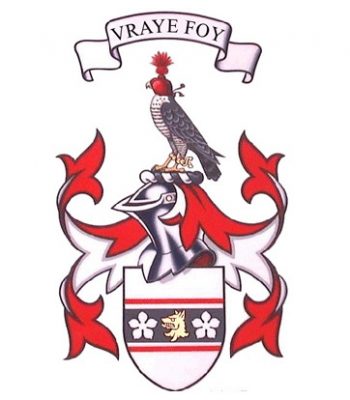 Arms
Argent on a fess Sable cottised Gules a wolf's head erased Or between two cinquefoils of the field
Crest
A falcon close Proper hooded Gules, jessed and belled Or
Motto
Vraye Foy (True Faith)
Authority
The Deputy Chief Herald of Ireland by Interlocutor 21 March 2001 and matriculated in the Court of the Lord Lyon 9 November 2001, Vol.74 page 61.
Notes 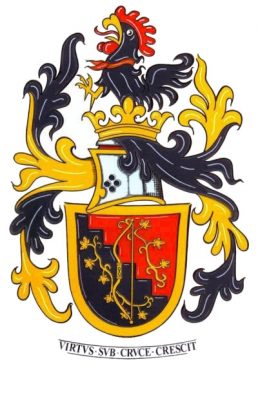 Arms
Per bend grady Sable and Gules two vines in bend overall a bow palewise all within a bordure Or, for difference
Crest
Issuant from a crest coronet Or a gamecock Sable combed and jelopped Gules beaked and legged Or
Motto
Virtus Sub Cruce Crescit (Virtue Comes Under The Cross)
Authority
Registered with the United States Heraldic Registry, 29 December 2005, and the Committee on Heraldry of the New England Historic Genealogical Society, 11 June 2005.
Notes 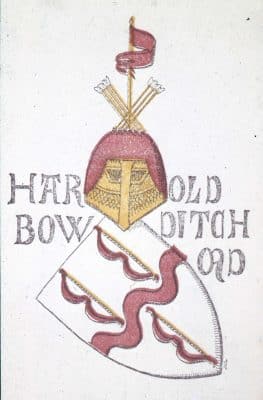 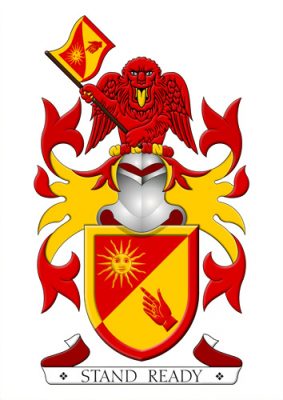 Arms
Party per bend sinister Gules and Or in the sinister base a dexter Hand couped at the wrist the index finder pointing at the Sun in Splendor in dexter chief the whole within a bordure all counterchanged
Crest
On a wreath Or and Gules a demi-Lion affronty winged Gules armed and langued Or holding in his forepaws an Oak Staff proper flying therefrom a Banner of the Arms
Motto
Stand Ready
Authority
Assumed (USA) 1980, Registered with the United States Heraldic Register and the Committee on Heraldry, New England Historic Genealogical Society, September 2005. 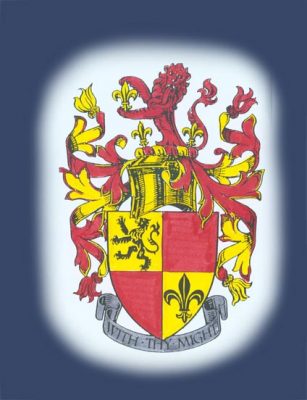 Arms
Quarterly or and gules, in the first quarter a lion rampant and in the fourth a fleur-de-lys sable.
Crest
On a wreath of the colours, Between two fleur-de-lys or, a demi-lion erased guardant gules, holding in the paws a fleur-de-lys gold.
Motto
With thy might (Ecclesiastes 9:10)
Authority
Granted to Rowland Bretton of HillCrest, Lightcliffe, in the County of York, Gentleman, on 30th day of August, 1937.
Notes 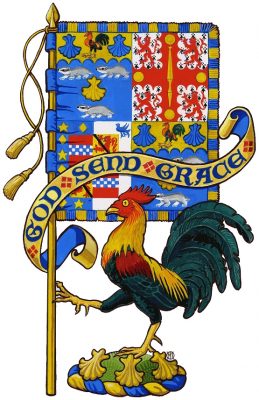 Arms
Quarterly, 1st and 4th grandquarters, Azure an escallop Or between three brocks Argent, on a chief engrailed Or a cock proper between two escallops Azure (Brocklebank), 2nd grandquarter, Ermine on a cross engrailed between four lions rampant Gules a tilting spear erect Or between four bezants (Royds), 3rd grandquarter, Quarterly (i) and (iv) Gules a fess chequy Argent and Azure, (ii) and (iii) Or a lion rampant Gules debruised of a riband in bend Sable all within a bordure per pale dexter Azure charged alternatively with four stars Or and four lozenges also Or, sinister Argent charged with in the sinister chief with a martlet Azure (Lindsay)
Crest
In front of a mound Vert thereon a cock proper three escallops Or
Motto
God Send Grace
Authority
Matriculated in the Court of the Lord Lyon, 26 October 1993, Public Register vol.76, page 18.
Notes 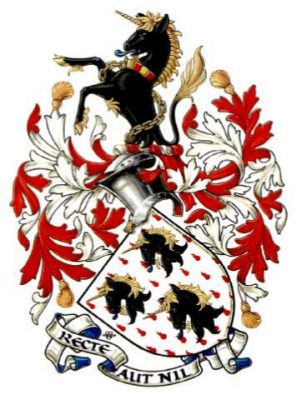 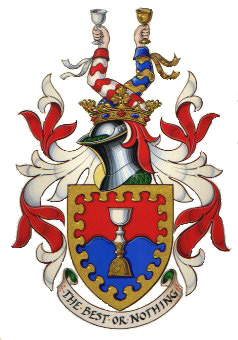 Arms
Per fess wavy Gules and Azure a cup and a cup reversed their bases abutting that in chief Argent and that in base Or a bordure nebuly also Or
Crest
Issuant from a coronet Or two human arms embowed the upper arms in saltire that issuing from the dexter vested barry Or and Azure attached to the cuff Azure two banderolles Or the hand proper holding a cup Or that issuing from the sinister vested barry wavy Argent and Gules attached to the cuff Gules two banderolles Argent the hand proper holding a cup Argent
Motto
The Best Or Nothing
Authority
The College of Arms, 5 October 2001.
Notes