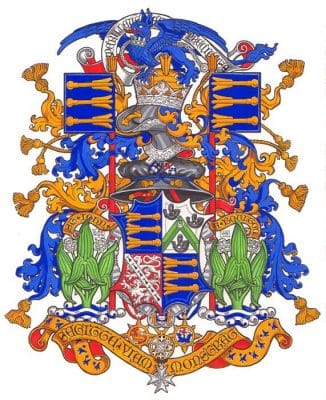 Arms
Quarterly, first and fourth Azure, three bird-bolts in pale fesswise heads to the sinister Or (for Boulton) Second Argent, on a chevron Vert between three bugle-horns Sable a crescent of the First for difference (for Forster); Third, Gules two lions passant Argent debruised by a bendlet Ermine for difference (for Strange).
Crest
On the Helm of an Esquire with a collar-band of demi-maple-leaves, a lip-band of demi-roses and a single bar Or, set in a Military Loyalist's Coronet Argent, a tun fesswise transfixed with a bird-bolt palewise Or, thereon a gryphon statant tail extended Azure, langued Gules and armed Argent gorged with a crown pallisado and therefrom a chain reflected over its back also Argent.
Motto
Above the crest: Perilleuse et precieuse. Base motto: Sagittae viam monstrant
Authority
College of Arms June 18 1974
Notes