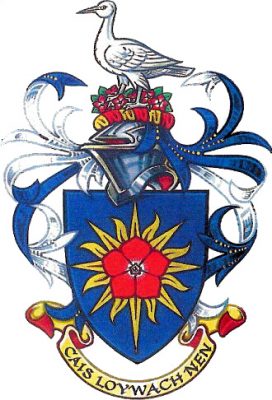 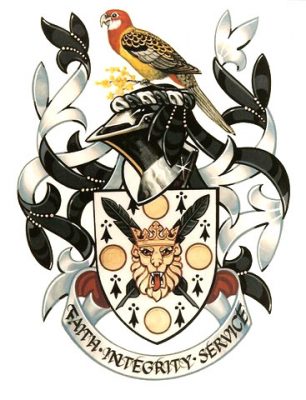 Arms
Ermine two Quill Pens in saltire points downwards Sable surmounted of a Lion's Face crowned with an Ancient Crown Or between four Bezants
Crest
An Eastern Rosella (Platycercus eximus) perched on a Sprig of Wattle all proper
Motto
Faith Integrety Service
Authority
The College of Arms, 25 May 1995. 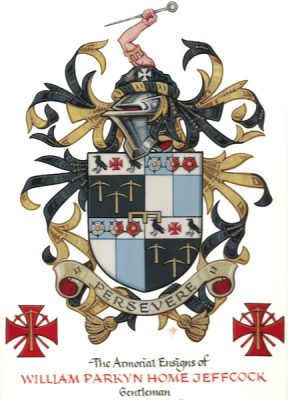 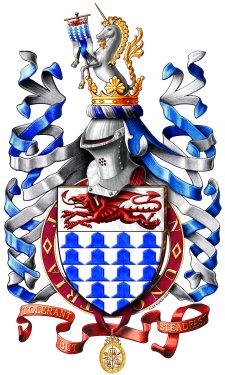 Arms
Vair on a chief Argent a dragon courant Gules
Crest
Out of a crest coronet Or a demi-unicorn Argent armed crined and unguled Gold supporting between its forelegs a staff proper flying therefrom a gonfannon of the arms
Motto
Tolerant But Steadfast
Authority
The College of Arms, 29 October 1994.
Notes 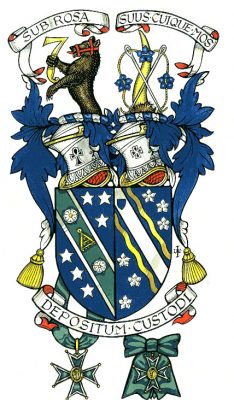 Arms
Azure on a bend Vert fimbriated Argent between six mullets also Argent a triangular harrow Or between two roses Argent barbed and seeded proper (Juby), impaling, Azure a bend Argent cotised wavy Or between six cinquefoils also Argent (Lines)
Crest
A demi-bear proper muzzled Gules holding in the paws a fleam Or (Juby). In front of a bull's dexter horn erect Or with scalp proper two bodkins saltirewise Argent and three cinquefoils Azure one and two threaded Or (Lines)
Motto
Depositum Custodi (Keep That Which Is Committed To Thee) & Sub Rosa (In Confidence) (Juby); Suus Quique Mos (To Each According To His Own) (Lines)
Authority
The College of Arms, 25 March 1974 (Juby - arms and crest. The arms of de Huby (suitably differenced on the bend) were subsequently granted by the College of Arms 1996) and 10 March 1981 (Juby - badge); 13 July 1987 (Lines).
Notes

For a badge: An ankh Gules surmounted of a rose Argent barbed and seeded proper (Juby). Artist: Dennis Ivall.