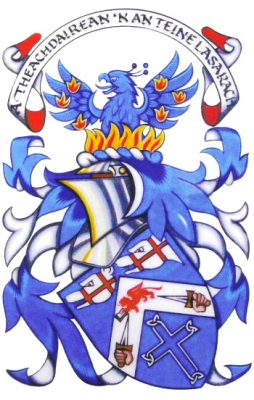 Arms
Azure on a chevron Argent between two bears' heads couped Argent muzzled Gules in chief and a Church of Scotland Diaconate cross Argent in base, the Lion of St Mark Gules holding an open book proper, between two hands grasping daggers the points turned towards the lion all proper
Crest
A Phoenix Gules in flames on its wings tongues of fire proper
Motto
A Theachdairean 'N An Teine Lasarach (He Makes Flames of Fire His Servants - Psalm 104 v4)
Authority
The Court of the Lord Lyon. 26th August 2010. The Public Register of all Arms and Bearings in Scotland. Volume 88 Folio 72.
Notes

For a pennon: Argent and Azure with the Arms in the hoist and the motto in two lines counterchanged. 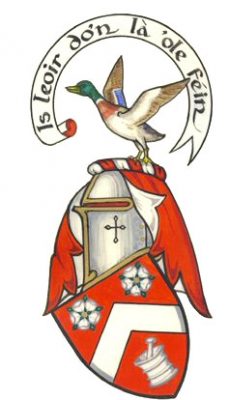 Arms
Gules a chevron between in chief two roses Argent barbed Vert seeded Or and in base a pestle and mortar also Argent
Crest
A mallard rising proper
Motto
Is Leoir do'n La ole Fein (Sufficient Unto The Day Is The Evil Thereof)
Authority
Granted in the Court of the Lord Lyon, 15 July 2005 (Public Register of all Arms and Bearings of Scotland, Vol.86, folio 33).
Notes 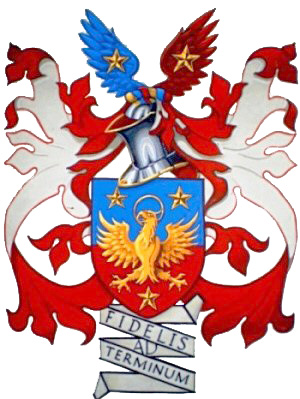 Arms
Per fess Azure and Gules between three mullets an eagle displayed the head nimbed Or
Crest
Two wings erect the dexter Azure the sinister Gules each charged with a mullet Or
Motto
Fidelis Ad Terminum (Faithful To The End)
Authority
The Deputy Chief Herald of Ireland, 6th February 2002.
Notes 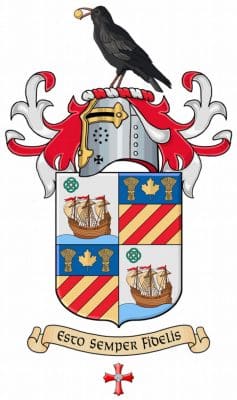 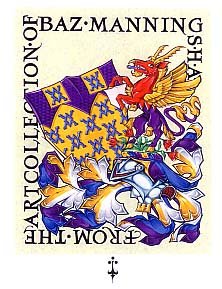 Arms
Or semy of millrinds Azure a chief dancetty of two full points upwards Purpure pierced twice of the field billetwise throughout
Crest
Upon a mount growing therefrom Giant Red Paintbrushes (Castilleja Miniata) slipped and leaved proper an heraldic antelope statant erect per fess dancetty Gules and Purpure armed tufted unguled and winged Or holding with the sinister forehoof and by a guige Tenny in the dexter forehoof an escutcheon Argent
Motto
Sine Qua Non (Without This Nought)
Authority
The College of Arms, 30 December 2000.
Notes

Arms
Argent, on a bend cotised Azure, three griffins paleways of the First. Above the shield from which is surrounded by its proper ribband the Badge of a Knight of Magistral Grace of the Sovereign Military Hospitaller Order of St. John of Jerusalem, of Rhodes and of Malta, is set the cap of Justice as Baron-Baillie, Vert doubled Argent stringed Vert, being as from the Liveries of the Barony of Tranent, and environed of two guards Or (of gold braid) thereon a Helm befitting his degree with a Mantling Azure doubled Argent and a wreath of the Liveries
Crest
An Arm and hand in armour couped at the wrist Proper the hand holding a sword in pale point upwards Argent hilted Sable between two wings Argent
Motto
POTIUS MORI QUAM FOEDARI (Rather Death Than Dishonour)
Authority
Granted by the Court of The Lord Lyon, 9th day of May 2005. Folio 25/Volume 87 and Registered with the Committee on Heraldry, New England Historic Genealogical Society, April 25, 2013. 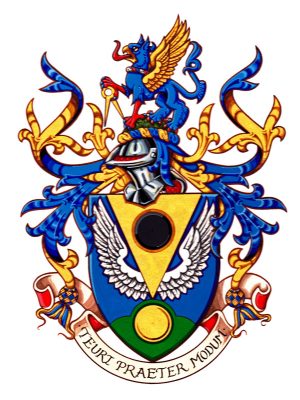 Arms
Azure on a Pile Or between two wings expanded Argent a Pellet in base on a mount of three cusps Vert a Bezant
Crest
upon a Helm with a Wreath Or and Azure On a Mount Vert a Griffin passant Azure winged and beaked Or langued Gules armed Azure around its neck a Wreath Argent Gules and Azure supporting with its dexter claw a Pair of Dividers points downward Gold
Motto
Teuri Praeter Modum (Protect Beyond Measure)
Authority
The College of Arms, 8th April, 1993. 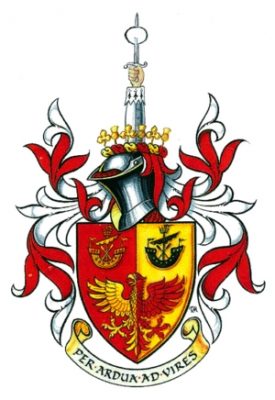 Arms
Per pale Gules and Or in chief two Lymphads each having between the forecastle and poop two Oars in saltire blades upwards sails furled that on the dexter Or and that on the sinister Sable in base an Eagle displayed counterchanged of the field
Crest
Upon a Helm with a Wreath Or and Gules issuing from a Circlet of alternate Trefoils slipped and Thistles slipped Or a Cubit Arm in armour proper cuffed Ermine the hand proper grasping a Dagger palewise proper the blade piercing a Snowball Argent
Motto
Per Ardua Ad Vires (Through Difficultly to Strength)
Authority
The College of Arms, 8 January, 2008.
Notes 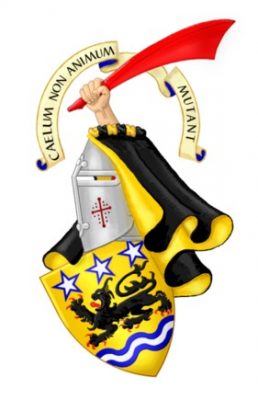 Arms
Or a lion passant Sable between in chief three stars Azure voided Argent and in base on a bar wavy Azure a barrulet wavy Silver
Crest
From a wreath of the colors a dexter hand proper brandishing a Creek Indian atassa (war club) Gules
Motto
Caelum Non Animum Mutant (They Change Their Skies But Not Their Souls)
Authority
Recorded by the Committee on Heraldry of the New England Historic Genealogical Society, June 11, 2005, on behalf of Rustem Warthen McMillan (1872-1926), the member's great-grandfather. 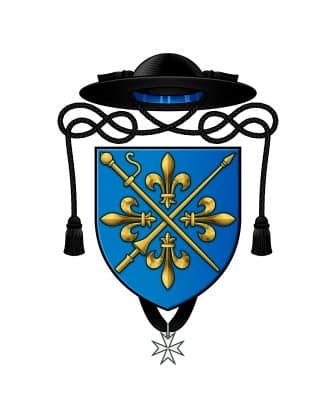