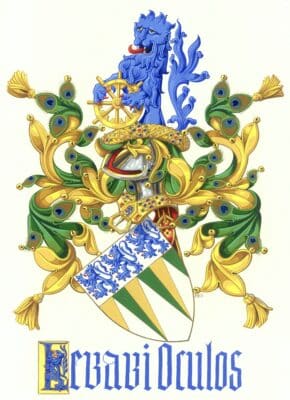 Mantling: vert doubled or (though not recorded in letters patent)
Artist: Andrew Stewart Jamieson ©2022
The piles reversed represent mountains as a nod to Sir Edwin's mountaineering interests, and the ship's wheel relates to his service in the navy during the Great War and his love of sailing. The motto "Levavi Oculos" is drawn from the first line of Psalm 121 "I will lift up mine eyes [unto the hills]", again referencing mountaineering. Sir Edwin's memoirs record that the three lions were a suggestion from Clarenceux, who noted the use of three lions rampant by the Norman FitzHerberts and the later Welsh Herbert dynasty. When Sir Edwin was raised to the peerage as Baron Tangley, he was granted the supporters, dexter a badger proper, sinister a roe deer proper.