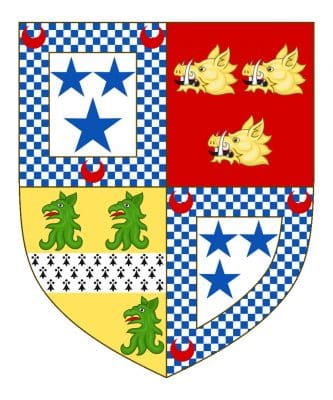 Arms
Quarterly, 1st and 4th, Argent, three mullets Azure, within a bordure chequy of the Second and First, charged with as many crescents Gules for difference (for Innes); 2nd Gules, three boar's heads erased Or, armed proper, langued Sable (for Aberchirder of that Ilk); 3rd Or, a fess Ermine between three griffins' heads erased Vert, langued Gules (for Brebner of Learney).
Crest
For dexter Crest, a boar's head erased proper, langued Gules, accompanied by two palm branches also proper, one on either side of the head, and, for sinister crest, a cubit arm in armour, the hand naked holding a dart point downwards, proper between two wings erect Or, each charged with a fess Ermine.
Motto
Ornatur Radix Fronde (The root is adorned by the foliage)
Authority
Matriculated 3 April 1916
Notes