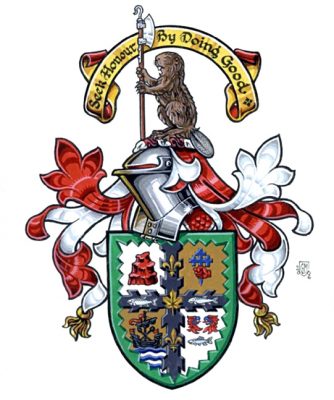 Arms
Quarterly, 1st, Argent, a rock Gules, 2nd Or, a dexter hand fesswise couped Gules holding a cross crosslet fitchee in pale Azure, 3rd Or, on sea undy Azure and Argent a lymphad sails furled oars in saltire Sable flagged Gules, 4th Argent, in chief two eagles' heads respectant erased Gules beaked and eyed Azure, in base a salmon naiant Proper, overall a cross raguly Sable charged at the centre with a maple leaf and in chief and in base with two fleurs de lys Or and in the flanks with two salmon naiant Argent, a bordure indented Vert
Crest
A beaver sejant erect holding in its dexter paw a Lochaber axe Proper
Motto
Seek Honour By Doing Good
Authority
The Court of the Lord Lyon, Edinburgh,Volume 86/folio 63. The Grant was made in memory to my great-great-great grandfather Donald McLean, with a subsequent matriculation to my father ( 86/64 ) The Rev'd John Sandford Fleming MacLean, and I inherited as his eldest son and heir upon the death of Father MacLean on January 2, 2006.
Notes